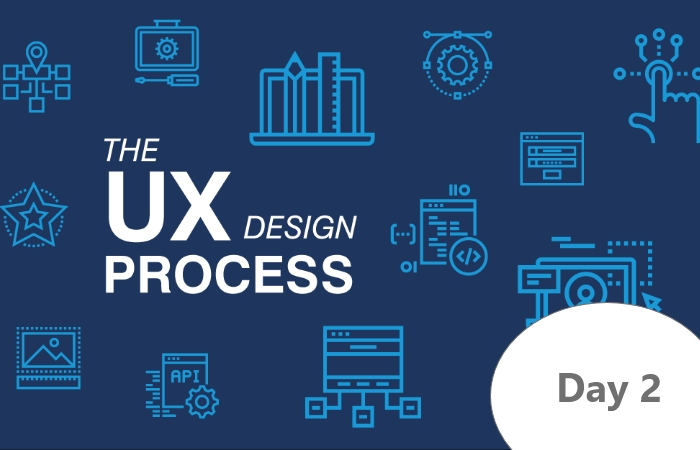 Now that you’ve “seen” what it’s like to have a critical eye for UX design, let’s personify this new knowledge by learning a bit more about what a UX designer actually does on a daily basis. While doing so, we'll see how many parallels we can draw between your current job and the UX design process.

“What does a UX designer actually do?” This question comes up time and time again from those curious about UX design. Let’s take a look at Ally. As a UX designer, what she does can vary dramatically from project to project. However, there is a typical procedure, as well as some general functions that Ally is expected to perform in almost every project. Why don’t we check them out?

Every design process begins with research. But where does research begin in the world of UX design? You guessed it! It all starts with the user.

Usually, Ally will receive a brief from the head of product asking her to conduct initial research for a new product feature. Ally then starts with competitor research to see what’s out there before moving on to interviews with actual prospective users. Ally also surveys and interviews any existing users, as well as product stakeholders, to identify their needs, pain points, and opportunities for improvement.

Research is essential in enabling Ally to pinpoint the core features her users need before jumping straight into the design.

Crafting a user persona is one of Ally’s favorite tasks. A user persona is a fictional but realistic representation of a set of target users based on their goals, needs, and behaviors (all discovered during the research phase!).

A user persona is a valuable tool in the UX design process because it reminds designers and other stakeholders that they’re designing for real people. Rather than designing for user group A and user group B, Ally designs for Jane, a mother of two living in London, and Steve, a recent retiree currently relocating to Rome. By humanizing the target user groups, personas help the designer build empathy with the user and prioritize key features and design decisions based on real user data.

Testing is a fundamental part of the UX designer’s job and a core part of the overall UX design process. Ally tests her prototypes with real users as a way of receiving authentic feedback on how to improve the design from those who’ll actually be using the product. Doing so with prototypes helps her catch any design flaws before the development starts — which saves time and money for the company.

The most common type of testing for UX designers is usability testing, which is a technique used to evaluate how intuitive and useful a particular design is. When testing is complete, Ally will use the results to improve the design, adjust the prototypes, and test again in a process called iteration.

After several iterations of prototyping and testing, Ally’s design is ready for a visual makeover. This is where the look and feel of the design come into play. These aspects are usually done in collaboration with a UI (user interface) designer, who ensures that what the user is presented with on the screen enables them to complete their tasks. Just like Ally, the UI designer has a solid understanding of the user's needs and goals, but their specialty lies in the user’s visual experience. We’ll talk more about UI design in an upcoming lesson.

Regardless of the scope of a project, Ally’s always worked closely with developers to reach the end goal, so she’s very cognizant of the good relationship she needs to maintain with the development team. While rapport can take time to establish, Ally is thoughtful about documenting the entire UX design process and the product’s visual design assets to ensure everything can be developed exactly as designed.

Today we met a UX designer, Ally, and took a look at her design process while exploring the key job functions of a UX designer. For today’s optional task, we want to turn the focus back to you.

Do any of the functions or tasks that Ally tackled closely resemble anything you do in your current job? If so, write down what they are and how they’re similar to the UX design process, and let us know.

Not sure where to start? An example could be calling customers and asking them what they thought of a recent Christmas holiday campaign or collaborating with other professionals to complete a project.